Of Symbols and Synchronicity... 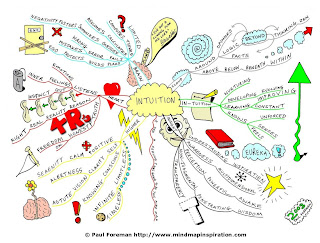 The other night, while crossing Whyte Avenue, a wolf ran in front of my car.
While it was likely a husky dog, on the lam from somebody's yard, it nonetheless seemed profound to me. Not only was it unexpected - a dog, wild or not, loose in the middle of one of the most urban streets in the city was a surprise, and seemed like a talisman of some kind - but it was also a beautiful symbol of the wild world, still accessible in a modern city centre.
The idea of symbols - emblems, talismans, amulets, juju, nonsense (whatever you'd like to call it) - has been on my mind lately. Somehow, autumn seems like an appropriate time to move beyond the mundane every-day sort of world, and to start thinking about a more interior journey, right-brain existence rather than left-brain tasks. The cooling weather seems to facilitate this kind of shift in me, and I find myself thinking less about the fun of summer barbecues and festivals, and more about the big questions of existence and purpose. 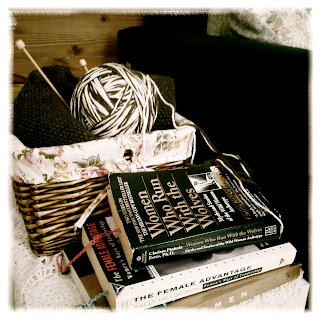 The book that sits on my night side table is Clarissa Pinkola Estes' classic - if a book published in 1994 can be deemed such - Women Who Run With The Wolves. It examines the image of the "wild woman"  - the intuitive, instinctual creature who embodies the feminine in all of us. Estes uses mythology and folk tales to unpack the archetypal wise woman, and above all, the image of the wolf as wild instinctual female power, natural yet mysterious, and for many of us, foreign.
So, to see a wolf run down Whyte Avenue was a powerful symbol, a beautiful little sniff of synchronicity that I took as a mystical pat on the back. Sure, it was likely the result of an irresponsible pet owner who left the dog alone in the yard, but for me it felt like a tiny spark of universal acceptance, the sense of "yes, I'm on the right track."
And that's the power of symbolism. I belief our subconscious - our lizard-brained limbic system, perhaps - speaks to us in symbols. Like for animals, words are immaterial to this primitive brain, and it shows us pictures or patterns to communicate its desires. But  words are louder, and our frontal lobes take priority. It's only when we shift our attention to allow these symbols to speak to us, to allow our instincts to be valued, that we can hear the soft whispers of our inner voice.
I think my inner voice has been screaming at me so long it has lost its voice. Not that I feel my life is a shambles because I've ignored this little light from within - quite the contrary, as my left brain has led me to some significant - and necessary - outer accomplishments. But that sad little inner smile is tired of my inattention, and is now reaching out, pulling on my sleeve and is asking to be heard. And so, slowly, and with a lot of apprehension, I'm looking down at that little voice, and am trying to honor it, to feed it. And marvelous things are happening.
The same night I saw the wolf, I read the chapter in Estes' book about Vasalisa, the nice little girl whose wise doll helped her stand up to the old hag, Baba Yaga. The chapter is about embracing intuition, embracing our wise little voice - or doll - who helps us in the face of adversity. The chapter is also about accepting the old hag, the unattractive but powerful force of age and experience, and letting go of that "too-nice" little girl spirit - the one that requires we make nice and seek out approval from everyone we know.
I had never heard the story of Vasalisa before, and was vaguely familiar with Baba Yaga from Russian folk tales my grandmother used to tell. Not ten minutes after reading the chapter, I checked my email, and found a cute little virtual chocolate heart from my mother. The tag on the chocolate - "Vasalissa Chocolatier."
Another delightful, cyber-delicious symbol of synchronicity - two in one night. This one was a subconscious chocolate treat - made that much more sustaining by being delivered by my mother.
So what do these perfect little drops of semiology mean? To me, it's a nod from the universe - or perhaps from my inner self (which may just be the same thing) that all is well, that connection is possible, that there is more than meets the left-brain eye. To me, this isn't about God, or the Creator, or anything outside of the self, although some may say that's exactly what it is - to me, this is about that necessary journey to the centre, that fulfilling, lyrical, symbolic treasure trove we have inside all of us, should we only be so lucky to look for it.
These numinous lights are the guideposts on the way. 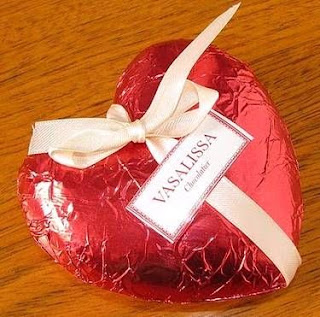